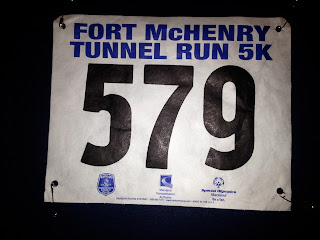 I took my own water filled up the bottle at the half way turn around then again at the end. I went through a lot of water! The tunnel actually gets pretty warm in there even though they pump fresh air in.  At the end they had bagels, fruit, and Outback chicken sandwiches!  That sandwich really hit the spot.
Posted by Cindy 6 at 12:00 PM No comments: