Today was a good great day.  Today was also a somber day for many as it is the 10th anniversary of the September 11th attack on America.  The country was busy today remembering those that were lost and celebrating that we will not be taken down.

The race takes place at Lums Pond in Bear, Delaware which is just out side of the University of Delaware campus.  We went up last night so that we wouldn't have to get up extra early for the over an hour drive.  We stayed at the Embassy Suites with a few friends.  We all met for the managers reception that all Embassy Suites have where you get free snacks and drinks, including alcohol!  After we filled up on free food we headed over to Klondike Kate's on Main Street for dinner.  I had basil salmon that was quite tasty.  After dinner we went across the street to a yogurt place where you put as much yogurt and toppings in as you want and the cost is based on weight.  I got cake batter yogurt with brownie bites, crushed cookies, and crushed graham cracker.  It was quite tasty.  Several of us stopped into the Panera Bread store to pick up breakfast items as the free breakfast at the Embassy Suites would be after we left for the race.  I got a sourdough roll and a pumpkin muffie.  The muffie was for after.  We all headed back to the hotel. The hubby and I got our stuff ready and watched some NCIS til bedtime.  I was so tired but crappy crappy sleep. This isn't the first time I have gotten crappy sleep before a race so I knew I could handle it.

We got up around 5.30am, gathered our stuff and headed downstairs.  The hotel actually did have their pastries, bagels, cereal, and coffee out for the racers so that was exciting.  I grabbed some bread I thought was sourdough except it was rye....yuck!  I was glad to have my Panera roll to eat.  We arrived at the park around 6.15am with transition closing at 6.45am.  We have gotten better at setting our stuff up and not needing to arrive quite as early to races plus these races are much smaller than the HoCo and D.C. races so you don't need to arrive early for parking reasons which is really nice!  We met up with our friends, they were all doing the half, and got our selves set up.  Thanks to Joe who lent me an extra race belt because I left mine at home.  At 6.45am we got a pre-race meeting that went through the logistics of the two races that are going on simultaneously ending with a tribute to a fallen local soldier, then the National Anthem. Everyone then headed over to the swim start which is 3/10th of a mile from the transition area.

The Half racers started first and we were about 20 minutes later.  We got to see a couple of them exit the swim looking strong before it was our turn.  The hubby went before first. At this race you have to walk a bit through the lake to the actual start buoy so it is important to be one of the first in.  If you wait you may end up quite a ways back when the clock starts.  I get to the front line for the swim and we take off.  There were several girls that were clearly swimmers (and have gone to practice much more than me).  I held my own although I did get passed, after the initial start, during the swim by 2 people, that did not make me happy!  The swim went well and I caught up to and passed a decent amount of the men's heat in front of me. I came out sat and got my shoes on and ran to the transition area.  I brought my Solomon's boating shoes for this part. I got into transition grabbed my bike stuff (no socks today) and headed out on the bike course.

Today was like a perfect storm.  Normally it rains, it always rains, I have done more triathlons with rain than without.  But today...no rain!  It was very overcast with a cool breeze, roads were dry, and there was no hot sun beating down, humidity was even in check.  It was perfect triathlon weather, perfect!  This perfect storm let me work on something that I have been trying to get right all season long. The Aero Bars.  I have tried a few times to use them but I have pretty bad balance. I know because my WiiFit tells me so.  I am scared of falling but the combination of good weather, dry roads, a smaller number of participants, and a flat course gave me the confidence to try.  I spent the majority of the race in the aero position which I have never been able to do before.  As I was riding I was happy with my accomplishment for the race as this is something that has been bothering me.  I was pretty happy and felt like I was moving along even with the head wind.  I even started to check out the age of the people passing me to see if any of them were in my age group.  As far as I could tell no one in the female 25-29 passed me but I didn't know who was ahead of me.  After a good 16 mile ride I headed back into transition.

For the run I decided with such a short run I would try running without socks to minimize the transition time.  On this run you are first on the grass til you get out of the general area then you run on gravel til you get to the main road where you run through the campground until a turnaround and come back.  It is a simple course that I really like.  On the first part I made friends with another female runner but she eventually left me, which is totally fine.  Not gonna lie I was checking out ages as I ran of people who passed me and those behind me.  Near as I could tell the only people in my age group I saw were behind me but I figured that the people who had already finished ahead of me were probably in my age group and were the ones who got the better swim start.

When I finished the hubby was waiting with a friend. I had passed by him a couple of times but he never seemed too happy with how his race was going.  I was surprisingly less than a mile behind him on the run.  We all headed over to the results board which produce live results so you know right away how you did which is pretty awesome.  The hubby's friend got 4th in their age group, just missing the podium.  He then turned to me and said "I think you may have won your age group."  Stunned doesn't even begin to express it.  I am excited when I win swim stuff but never even get close in triathlons let alone winning the age group. We weren't planning on staying around for the awards (we needed to get home because the Ravens were playing the Steelers today).  I couldn't believe it.  We waited around and got to see our friends Mark and Rob start the run portion of their Half Ironman, both looking quite strong going into the run.

So we waited around and I got to stand on the podium!  They started the awards a little early and the 2nd and 3rd place finishers weren't there so it was just me on the podium. Can we say awkward?? 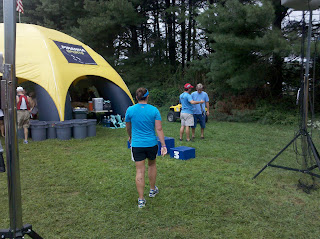 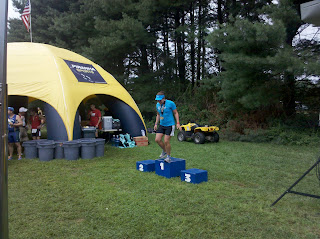 After the exciting awards ceremony we quickly went back to the hotel to shower and change before heading to the Second Chance to watch the Ravens versus the Steelers.  One of the cool things that happened is one of the Piranha-Sports staffers raced and won his age group. The cool part is that he is deaf so instead of clapping out loud everyone did the visual sign language clap.  How awesome and respectful!  We later found out that our friends doing the Half Ironman did great too! Rob and Heidi each took 1st in their age group and Mark took 3rd in his!  All of them are doing the Florida Ironman so this was more of a training day for them.  Additionally our friend Suzy was competing at the World Championships for Half Ironmans in Vegas and was top 10 in her age group on the world stage!

On the way back I called my Mommy to give her the good news. She was quite happy for me!  When we got home there were flowers and a balloon from my mom and grandparents!! They are too cute and I definitely appreciate their support.

To make the day even better the Ravens beat the Steelers and it wasn't even close! The Steelers looked like a high school team!

What a great day and all made possible by the awesome USA!