So I know I am a bit a lot behind on posting for the events I have done this summer. I swear I will get to them.  I figured today while my cake is in the oven for tomorrow I would give a run down of today.  Today was Iron Girl.  Iron Girl is a sprint triathlon that really isn't for the pro, super competitive athlete.  Iron Girl looks to celebrate all females and gives a very supported atmosphere for females to try a triathlon. There are women of all shapes, sizes, ages, and ethnicities.  I feel at this race you see the most variety in athletes than any other tri's I have done.  This race sells out like within a day or so which means you need to know the day registration opens if you want to do it or not. No hesitations, I made that mistake for last year.  So anyway I signed up in the Fall of 2010 for an Aug 2011 race.

This year for vacation we decided to go to Hawaii.  Now being a teacher and having a summer job means that I have about 2-3 weeks each summer which is the only time out of the year I have no responsibilities to any job.  This is my only window and I cherish it!  You can read about our travels in my hubby's travel log.  We left for Hawaii on Aug 8 and returned Aug19 but we had to actually leave Hawaii Aug 18 and were up for about 36hours on various flights to get home.  We slept from Fri to Sat for 15 hours! Big big mistake!  My mom called at 9.30am to tell us about the birth of our newest cousin Julianna Elizabeth. I said great and rolled over to continue sleeping not realizing that it would be 1pm when I woke up!  Got some good deep sleep.  Around 10.30pm last night we settled in bed for the night knowing that I had to get up at 5am to set up and the hubby had to get up around 4am to go volunteer.  Sounds like a good plan right? Well....we couldn't sleep....I tried reading, we talked. Finally around 1.30 we decided to watch some How I Met Your Mother.  We love this show and no vacation we started watching the first couple seasons as we have been late adopters of the show and it makes for excellent plane entertainment.  Around 2.30am we decided to try the sleeping thing again but to no avail.  I was starting to get sleepy but the hubby was wide awake so decided to try and let me get some sleep and got out of bed around 3am.  I actually did fall asleep til my alarm went off at 4.50am and I was planning to snooze it except I didn't know where I was and couldn't remember how my alarm clock worked.  I pressed a lot of buttons but decided I probably didn't activate the snooze and I should just get up or I might sleep through the event.  To summarize I got up to do a triathlon on less than two hours of sleep.  Brilliant plan right? 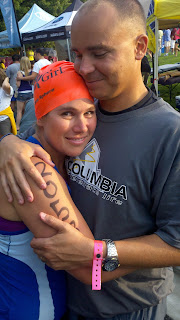 I made my way over to the park to set up my transition area and meet the people around me.  I had everything all set up and then it rained.  Ugh!  We have done more races in the rain than not.  IT ALWAYS RAINS on me!  Rain always makes me nervous on the bike and with virtually no sleep I was not a happy camper.  They delayed the start of the race due to the passing storm and all the thunder and lightning.  My heat goes off 59 minutes after the first wave.  The swim is definitely my strength.  I will judge how well I did in a race based off of my swim time and place.  I don't know my time I forgot a watch.  I was able to get a quick start and get ahead of the pack.  Most triathletes are crappy swimmers so that is my only advantage.  I was battling it out with some other chick.  I had a quick wave to Coach Sue in the blue kayak who I could hear cheering for me. Me and the other chick were side by side with a few yards between us it was a good duel but then she got a better turn at the first buoy and I wasn't going to catch her.  I got a little tired on the second half because of how much I wanted to get first in my heat but I had strong enough lead on the rest of the pack that no one caught me (or at least none that I saw).  I was pleased with my swim and had a good run into transition (usually its not very good).  I did something different today. Usually I wear a sports bra type of top and then put on a tri top in transition. Today I decided to wear the tri top in transition and see if that helped my times.  I will be interesting to compare my swim time with the extra drag to my previous transition times.  I headed out on the bike and the roads were still a bit wet which makes the hills of Howard County kind of scary.  Felt like I had a solid bike ride.  I passed some people and I got passed.  There was a lot of "on your left" both said by me and heard by me (which is what you say when you are passing someone).  I kind of felt like a recording would be helpful where I could just push a button on my bike and it would say it for me.  I try to be very courteous when passing and I try to thank people but there are those obnoxious people that just scream out "on your left" and expect you to get out of there way even if you are in the throws of passing someone.  There is no need to be a jerk, if you want a clear road ahead of you train harder and get a pro card so you can start earlier.  So overall a good solid ride, I even went into my aero position for a few flat spots.  Will be interested to see how the time turns out.  So then a quick change and on to the run.  I am amazed at this point that I still have energy left.  I run out of transition and grab a water at the water stop and keep running. Normally I walk through water stops but I was so amazed by the energy I wanted to keep going.  The run was pretty solid, again don't know the time.  I walked all the rest of the water stops and my only other walking spurt was to the water stop at the top of Gatorade hill. I needed to walk a little early but I was getting close to the end only a mile left.  It was at this hill that my friend Gwyn shouted "you have been exercising longer than you have slept" which made everyone on the hill chuckle and she was so right. 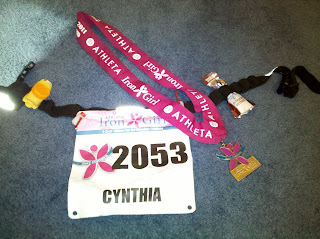 I was super happy to finish and finished strong.  My overall time was not competitive in the least in my age group but it was, surprisingly, a personal best time based on what I could find of my previous finishes.  I look forward to when the splits come out so I can see where I cut the time (it was only about 3 minutes better).  Today I had fun, I don't always say that at triathlons but today was fun.  Not sure what was different, maybe I didn't over think things because thinking energy was diverted to my legs. Maybe the lack of sleep actually helped, who knows.  Today I am an Iron Girl. 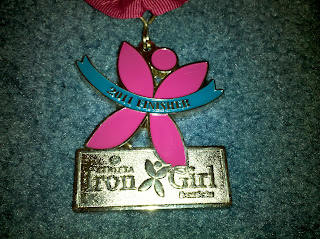