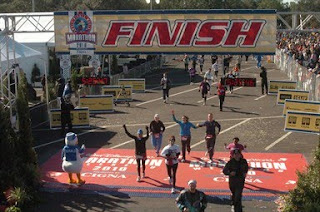 Well it has been quite a year! In January we completed our first marathon and it was the Disney marathon too! The training up to it had some pros and cons. The definite pro was the time we spent together on our long runs. It was uninterrupted, untechnologied time together. The definite con to training for the marathon was the constant amount of time involved and oh there was that knee problem. My IT band decided it wasn't a fan of training for a marathon and tried to make my knee give out on all downhills. So we were running the uphills and walking the downhills. I am now quite good at going uphill. Luckily Disney had one hill. It was a great experience to finish in Disney World holding hands for our first marathon. We then spent two days playing in the parks and they even still had some of their holiday decorations up. This one is definitely a must do! A separate post will be a repeat posting from Facebook of the highlights of our 26.2 mile journey. Oh by the way it was the coldest temps in Florida recorded history....there was ice at the water stops...we slid right through. 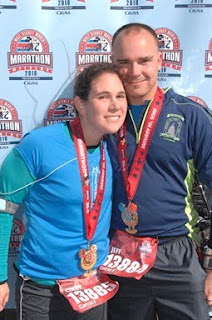 May was quite a busy month as usual. We did the Lake Anna Sprint Tri. I took off I believe 7 min from last year. My goal was to break the 2 hour mark and I would have done it if the chain on my bike hadn't popped off! Arrrrg! I was literally watching the seconds on my watch as I was running trying to play catch up with the time. That one is fun because always stay in a house with friends. Also in May is the Columbia Triathlon. This was my first year doing it solo. A few years ago we did this one as the relay team Will Play for Gumbo. The hubby did it for the first time last year and I volunteered (I got to bodymark Chrissie Wellington!!) This year right on cue with the other years it rained and well actually it stormed at 4am! Our stuff got soaked. It was still kind of spitting when the race started. I seriously considered not racing, there are really steep hills and the race is not worth getting hurt over. But I did it and afterwards we went out to Champs where I cashed in my free birthday dessert. It was huge! A team effort was made to eat it!
In June I did the Diamondgirl triathlon at Lums Pond Delaware. This is my all time favorite triathlon!!! It is really small, there were only about 160 entries. I was in the first heat and since swimming is my strength I think I was like the 4th or 5th out of the water. I got all the "wow you are fast" claps and cheers. Little did they know that their favorite athlete would go whizzing by me on the bike! This year I finished in the top 50% so that was good and this race always helps me post my fastest run splits ever! This year was 8.15 per mile. While for some this is their marathon pace time for me this is amazing. This is a small race that is not populated by pros and elites and its awesome!
June also saw us swimming across the Chesapeake Bay. This is a really cool event that raises money for the March of Dimes. This was not my first trek across the bay but it was for the hubby and the best buddy Mo. We trained up for it beginning two weeks after the marathon. I tried to stay with the hubby swimming since he ran with me for the marathon but unfortunately I looked up once at the helicopter circling and then he blended in with all the other swimmers! I felt horrible but there was no way I was going to find him so I had to swim my own race. This year was way better than two years ago when I did it. The seas were as calm as they were gonna get. I finished 30 min faster than two years ago! Both the hubby and Mo broke my time. The only downside was the suit burn I got. I really need a new wetsuit!
July and August were calm. I was signed up for Diamondgirl NY which as a Half-lite meaning it was longer than an Olympic Triathlon but less than a Half Ironman. Well only 22 of us signed up so they canceled it! Arrrrg so I used that entry fee to do Diamondman in September.
So we completed Diamondman Delaware 70.3. This was our longest distance event ever! We didn't exactly train for it like we had wanted and in true Six fashion it rained, make that down-poured for the swim and half of the bike leg. See previous post for all of the unpleasant details. 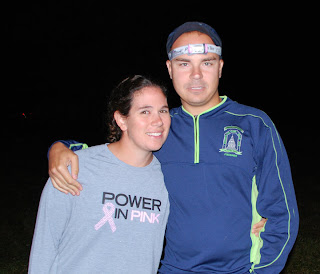 In October we finished out our season with the Baltimore Half Marathon and Army 10-miler. I didn't end of the high note I would have liked. I hadn't been running because life and feeling like crap got in the way but oh well...
What have I learned you ask, well I have learned that swimming only gets me so far. I can't rely so much on my swimming abilities and I really need to work on my biking and running. My winter plan is to put some Aerobars on my bike and set it up on the trainer. The bars are really so I can read a book while biking. My plan is to bike for several hours and build up my flat riding. I am good going up hills but the downhill recovery and flat riding really suck. I am kind of scared of my big gears so I need to get over that. I also need to really learn how to run so that it isn't so difficult. Running is really hard for me, I need to learn how it can get easier.
Right now I am already signed up for the Columbia Triathlon, Irongirl Triathlon, and get this a 70.3 Half Ironman in Orlando, Florida! Super excited for that one and really nervous. I don't deal well with heat so that may be a challenge but I definitely want to train up to it much more than I did for Diamondman. We are considering the Virginia Beach Shamrock marathon or half marathon. We have some friends doing their first marathon so we want to go down and support them but that would mean training begins in December and we have gone straight for the past 18 months because of Disney and the bay! So I part of me wants to stay on the break and winter training is not easy to schedule with weather issues and my knee is continuing to act up. So I have a lot of excuses/reasons to not but there are also reasons to do it. I still need to get better at running, we want to support our friends, it's a fun race (we did the half as our first), so I just don't know. Today I started some weight training at the gym with the idea that if I strengthen the muscles around my knee maybe it won't hurt so much. We'll see how that goes. We are also looking at ending next season really big! We are going to try and get into the New York City ING marathon, if we don't, as a lot of people don't make it in, our back up is to do the Goofy Challenge in Disney World in January of 2012. What's the Goofy Challenge you ask, well it is positively Goofy! You do the half marathon on Saturday then the full marathon on Sunday! Yikes I know! We would take the Saturday run quite easy with picture taking and walking mixed in. That would be a pretty cool accomplishment. The NYC marathon is a highly desired race as well so we will be happy with either. We won't know until March or April if we get into NYC and luckily I don't think the Goofy sells out too fast, hmmm can't imagine why.
So there it is our year in review, the highlights if you will of accomplishments and disappointments but year to be proud of nonetheless.
Happy Training!
Posted by Cindy 6 at 3:29 PM